In May 2018, the much-discussed GDPR will be enacted. Besides identified data and anonymous data, the European regulation introduces a new category of data, called pseudonymous data. This articles presents an approach, based on cryptographic pseudonyms, that can help governments to become  GDPR compliant more easily in case personal data originating from different sources need to be combined for analysis purposes.

We focus on the following situation. What if a research team wants to analyse large sets of personal data? Say it needs medical, financial and demographic data of all citizens with a wage of at least € 40.000, born in or after 1990 and who are self-employed as a secondary activity. Data sets managed by different government organizations would need to be linked together. Such requests are common, and any government should be able to answer them. Yet is it possible with due respect for the privacy of citizens in an era of big data?

Before answering this question, let’s first clarify the distinction between the three categories of data defined in the GDPR: Anonymous data, identified data and the new category, pseudonymous data.

By replacing identifiers by pseudonyms, we convert identified data into pseudonymous data. However, completely removing the identifiers does not necessarily result in anonymous data and should in many cases still be considered as pseudonymous data. Imagine, for instance, that the medical records contain the social security number, the gender, date of birth, the ZIP code and some medical data, such as the disease the citizen is suffering from. Imagine that only the identifiers are removed. If Bob knows the date of birth, gender and ZIP code of Alice, he is often able to link this de-identified medical record uniquely to Alice, and is, hence, able to learn sensitive medical data about her.

In a traditional approach, the data-delivering government organizations send the required data on a regular basis to a central data warehouse that stores the personal data. Data of the same citizen are trivially linkable to each other. If a research team wants to analyse data, it receives a pseudonymized subset of the data. Although linking of data originating from different sources becomes trivial, the approach comes with several risks:

Can we do better? Can we use technology to reduce these risks? How well can we protect personal data by using cryptographic pseudonyms? By answering these questions, we also shed light on what future analysis on personal data originating from multiple sources might look like.

The core idea is to have, instead of one big data warehouse, several 'data islands' which are maximally isolated. As illustrated in the figure below, we distinguish between the long-term domain islands, with strong isolation, and the short-term project islands, with a somewhat weaker isolation.

Also, for the project islands, isolation is maximized, although at a lower level than the domain islands. We again apply the concept of island-specific pseudonyms. For each (domain or project) island, the same citizen is known under a different pseudonym. Note, however, that based on shared attributes, it might be possible to link records on a project island to other (domain or project) islands. Therefore, it is still important to sufficiently protect the project islands and minimize not only their lifetime, but also the data they store. Maybe the project does not need the exact date of birth, but just an age category.

By applying this approach, we arrive at the situation shown in the figure below. Although records of the same citizen are known by organizations under the same social security number, the citizen’s personal data are known under a different pseudonym on each island.

This results in the following properties:

The use of cryptographic keys is sketched in the figure below. Organizations and islands have keys, which are used to convert identifiers into pseudonyms or pseudonyms into other pseudonyms. Pseudonym conversion is indicated by a dashed line near the corresponding key. 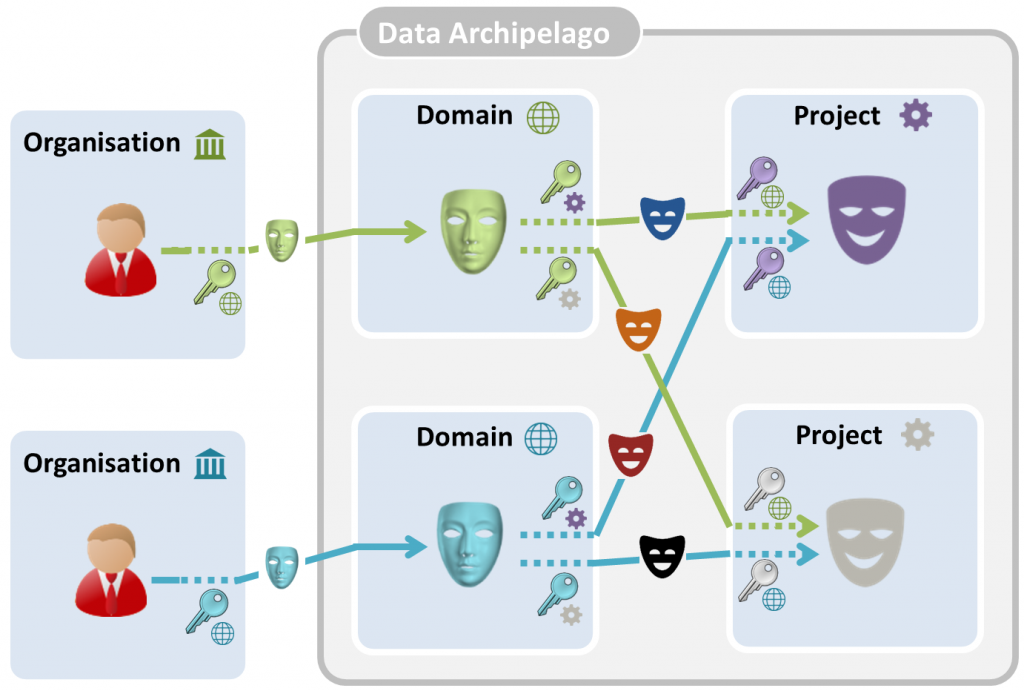 Each organization has a master key, each domain island has a key per project that it delivers data to, and each project island has one key per domain that it receives data from.

By properly choosing the keys in the system, the following properties are achieved:

In summary, a citizen is known under a different, unlinkable pseudonym on each island that contains personal data about him or her.

An example to illustrate the protocol

Let’s have a look at the example described in the introduction. A research team wants to analyse large sets of personal data. Say it needs medical, financial and demographic data of all citizens with a wage of at least EURO 40.000, born after 1990 and who are self-employed as a secondary activity. For the moment, we restrict our example to three domain islands and assume that the required personal data are stored in the second and third domain island:

In order to obtain the required data, the following steps, illustrated in the four pictures below, are performed:

The presented approach, however, has some drawbacks.

Both drawbacks can be prevented. We refer to our detailed report for more details.

In this article, we sketched the main ideas of the Data Archipelago, which we invented three years ago. Since then the concept has only gained importance, especially given the upcoming GDPR. Indeed, this European regulation encourages the use of privacy by design, which is exactly what we did here, as well as the use of pseudonyms. We presented a very specific case, linking together personal data for data analysis purposes, but we are convinced that the use of cryptographic pseudonyms can and should also be applied in many other contexts to better protect the privacy of citizens. In that respect, in the meantime we also came up with a blockchain based prescription processing scheme, that uses one-time pseudonyms to protect not only the privacy of the involved citizens, but also the confidentiality of business information. Unfortunately, the use of cryptographic pseudonyms is less straightforward than traditional approaches, which poses to European governments the challenge of obtaining and developing the right competences.

Several aspects have not been discussed in this introductory article. We didn't talk about key generation, re-identification in case of fraud, or less straightforward combinations such as family configurations. We emphasize that for each of these aspects, we have come up with solutions.

If you have questions or suggestions regarding our approach, feel free to contact us.

This website uses cookies to improve your experience while you navigate through the website. Out of these cookies, the cookies that are categorized as necessary are stored on your browser as they are essential for the working of basic functionalities of the website. We also use third-party cookies that help us analyze and understand how you use this website. These cookies will be stored in your browser only with your consent. You also have the option to opt-out of these cookies. But opting out of some of these cookies may have an effect on your browsing experience.
Necessary Always Enabled
Necessary cookies are absolutely essential for the website to function properly. This category only includes cookies that ensures basic functionalities and security features of the website. These cookies do not store any personal information.
Functional
Functional cookies help to perform certain functionalities like sharing the content of the website on social media platforms, collect feedbacks, and other third-party features.
Performance
Performance cookies are used to understand and analyze the key performance indexes of the website which helps in delivering a better user experience for the visitors.
Analytics
Analytical cookies are used to understand how visitors interact with the website. These cookies help provide information on metrics the number of visitors, bounce rate, traffic source, etc.
Advertisement
Advertisement cookies are used to provide visitors with relevant ads and marketing campaigns. These cookies track visitors across websites and collect information to provide customized ads.
Others
Other uncategorized cookies are those that are being analyzed and have not been classified into a category as yet.
SAVE & ACCEPT